Christians, Disney Is Not The Problem

Social media was recently set ablaze when it was announced that Disney will feature its first “exclusively gay moment” in the new live-action remake of Beauty and the Beast, a moment described as such by the film’s director Bill Candon in a recent interview found in Attitude Magazine’s April issue. The article title is as follows, "WORLD EXCLUSIVE: ‘BEAUTY AND THE BEAST’ SET TO MAKE DISNEY HISTORY WITH GAY CHARACTER." So there you have it, Disney history folks. Now there is little doubt that Disney fully expects the backlash that will be brought about by this announcement, Disney is not stupid and you can be sure that they will have their rebuttals and rhetoric well choreographed to take on the ensuing fallout. They are not ill prepared and their move was calculated. Many will celebrate this moment, what is deemed as a “watershed moment” by the editor-in-chief at Attitude Magazine. For others this moment is long overdue. GLAAD, a non-profit devoted to making sure the LGBT agenda is “representative” in media has lashed out at Disney in recent years stating that “Walt Disney Studios has the weakest historical record when it comes to LGBT-inclusive films.” Others believe that this latest PR stunt, inclusion of a gay character, isn't enough. Some are even drawing parallels that Disney is actually villainizing LGBT characters (i.e. LeFou, the gay character in question is the evil Gaston’s little sidekick, traditionally he is also a fool to be laughed at). Any way you slice it there will no doubt be controversy, and yes, boycotts.

This latest frontal assault has left Christian parents squirming. Popular Christian voices have taken to social media to show Disney their disdain. On his Facebook page evangelical leader Franklin Graham wrote, “They’re trying to push the LGBT agenda into the hearts and minds of your children—watch out! Disney has the right to make their cartoons, it’s a free country. But as Christians we also have the right not to support their company. I hope Christians everywhere will say no to Disney.” In moments like this we, as Christians and parents, must take a step back, to take a macro-level view at what exactly is going on and how we as Christians should act and react. Now think for one second, do you honestly believe that during the start of this project there were actually people huddled inside Walt Disney Studios whose soul desire was to send Christian families a big middle finger? I don't think so, any ill thoughts towards that regard were secondary at best. Disney is simply caving to the minority and has lost itself in the echo chamber of social initiatives. Disney is a business, which means in this particular move they see a clear ROI. Disney has fallen victim to the same sentimentalism and moral relativism that is currently plaguing the culture at large. The natives have grown restless and Disney is throwing a nice, well calculated bone to ease their anxieties. If we have learned anything in the past few years it is that the LGBT community is good at destroying businesses that do not meet or celebrate their standards. Let’s also not forget the fact that Disney has been sympathetic to the LGBT cause for many years, yet many still line up to see their latest blockbuster.

#Christians today are very good at reaction, but very poor at action. Action is a preemptive endeavor.—@JacobLPippin

So is it disturbing that Disney would make this move? Not at all, it was to be expected. The disturbing element to all of this is the reaction of the Christian community. Let’s settle something in our hearts now, to soften future blows, the LGBT has an agenda, a script that they have been following for a long time. Becoming mainstream is a part of that agenda but it is not the end goal. The end goal is to garner celebration from all, to make others join in the collective clapping of the hands, even if it is against their will or conscious. They want a profession of allegiance for their cause and they're not afraid to get it by any means necessary, government coercion would be ideal. Is part of their agenda to win the hearts and minds of our children? Of course, but this is where the fallacy starts. Christians today are very good at reaction, but very poor at action. Action is a preemptive endeavor. As Christians it starts with our standard of authority, God’s Word, from this point we are called to “take every thought captive to obey Christ” (2 Corinthians 10:5). What we allow to derail us along the way is on us. The fear is that there are LGBT advocates lurking behind every corner ready to indoctrinate little Johnny with homosexual ideals while he is skipping carefree down the road. This mentality is the issue. If this is where our minds automatically come to rest then we have missed the writing on the wall. Mom an Dad should have already begun the process of teaching little Johnny the foundations of God’s Word so that he too can learn to take every thought captive in obedience to Christ, we don't sit around waiting to react, we prepare.The biggest cesspool for the anti-Christian worldview is not found in the local movie theater it is found right down the road, at the local government school. I wonder how many outraged Christian parents send their children to Rome for eight hours a day and then somehow cry foul for Disney’s newest immoral charge. That is where the outrage should begin, who is educating your children? The formative years spent in a world contrary to the biblical worldview will have far greater implications than any two hour movie every could. 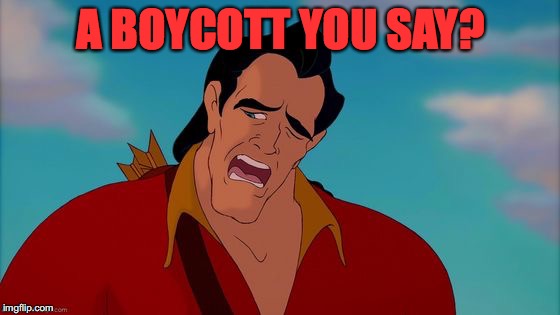 So, do we boycott? Be my guest, no pun intended, okay maybe a little. Sure, boycott. You control where and how to spend your money (most of it anyways). Just realize the amount of work it will take to truly remain consistent. You know why I don’t worry when moments like these come, because I prepare for them. I do not look at them as topics to be avoided, I welcome them as strongholds to be thrown down. Will I watch the newest Disney flick? Maybe so, at home. Will I hit the pause button when I see something of concern, yes I will, and I will be sure to start our family discussion with “Thus says the Lord.”

Jacob Pippin is an authentic Floridian laying his roots down in the beautiful, small town of Sanford, along with his wife of 9 years and their 3 children. Writing topics of interest, and necessity, include the family, education, and the uncovering and hopeful devastation of liberal ideology.